University Place—Mari Leavitt, a longtime education leader, PTSA mom and small business owner with her husband Drew, has announced that she will run for the State House in District 28. Leavitt, a Democrat, will challenge 20-year Republican officeholder Dick Muri. Despite a late entry to challenge Muri in 2016, Leavitt’s campaign became one of the most closely watched in the state. With an early start this year coupled with the ideological partisanship in Trump and Republicans in Washington, DC and Olympia, Leavitt believes the electoral environment in 2018 is different.

“Every day we are confronted with policies from Congress and local Republicans that undermine middle class and working families. They’re eroding the safety net for seniors and veterans, and making the future more expensive and more difficult for our kids,” said Leavitt. “We desperately need new independent-minded leadership to restore balance and common sense to our policies and politics.”

Leavitt has worked for nearly two decades in the South Puget Sound to expand education and career training opportunities at four year and technical colleges. After serving as Deputy Director of Pierce County’s largest human services agency, she returned to higher education. Leavitt is currently working to make campuses more equitable and safe—addressing sexual assault and other threats to students seeking a college degree.

“I’ve spent my career working to help Pierce County residents from all walks of life achieve their potential—from displaced workers and vets to high school grads pursuing their dreams, to families struggling with homelessness or a loved one with addiction,” said Leavitt. “This is the role of government—to invest in people, help them gain a foothold, create a level playing field for economic success.”

In contrast, Leavitt points to actions by Olympia Republicans—continuing to deny the need for additional school funding, at odds with community and technical college expansion, and even opposed mental health funding as symptoms of the divisive politics gripping that party’s elected officials.

“Voters of all political stripes want to do right by students, seniors, veterans and their families, and the vulnerable,” said Leavitt. “But sadly, in an era of winner-take-all politics local families are paying a high price for partisan gains. Low income families will be paying more in taxes, our schools are still underfunded, and we’re handing out corporate tax breaks instead of fixing our congested roads and highways.”

In addition to bread and butter issues like education, taxes and transportation, Leavitt is alarmed by the increasingly vocal efforts to roll back basic women’s health and family planning—including mandates for contraception and other established policies.

“I cannot believe that in 2018 we are debating whether employers should cover contraception for women in the workforce,” said Leavitt. “These terrible policies would harm women and families across the region—and the nation—yet some politicians would impose their narrow ideology on the majority of our workforce and population.”

Unlike 2016, when Leavitt entered the race in late May, she believes a January start will allow more time to meet with voters and community leaders.

“I am excited to have a real dialogue with my neighbors here in the 28th,” said Leavitt. “I love that our district is made of diverse and hard-working residents that serve each other daily and care deeply about strengthening our neighborhoods. I plan to use what I learn and have learned from people in our district to bring positive leadership to the State. We have many challenges facing our communities, and I look forward to bringing back community driven solutions and uniting around shared local values.”

Leavitt grew up in a military family and settled in South Pierce County after her father was stationed at what was then Ft. Lewis. She and her husband Drew together own a local orthodontia practice and are raising children in University Place. They have a son serving in the U.S. Air Force, and the youngest two are adopted from foster care.

“In many ways, my family is an amalgam of so many here in the district,” said Leavitt. “We’re from a proud military family, active in our public schools, and work hard to create jobs and give back to the community we serve. It’s a foundation of local values and life experience we need in Olympia to better serve our growing, dynamic region.”

A little over two years after a tragic Amtrak accident across I-5 that took three lives in DuPont, State Representatives Mari Leavitt and Christine Kilduff are partnering with US Representative Denny Heck to push for rail safety improvements on Amtrak trains at the state and federal level. US Representative Heck introduced HR 6066, the Passenger … READ MORE

New protections for children are on their way to becoming law thanks to new legislation passed by the House Tuesday morning. Rep. Mari Leavitt, D-University Place, introduced House Bill 2442 which was approved by the House in a near unanimous 96-1 vote. The legislation puts into place restrictions on advertising of specific products to minors and restricts … READ MORE

Two Pierce County area legislators this year have proposed that high schools be required to track such information. A report would be published every fall for public inspection and for study by state university researchers. House Bill 2731 is a sensible bipartisan idea offered by Rep. Morgan Irwin (R-Enumclaw) and Mari Leavitt (D-University Place). It directs … READ MORE

Also on the table: a bill that would make college costs more transparent. If it’s approved, acceptance letters to any of the state’s public colleges would provide students with the estimated cost to earn a degree. These letters would also list financial-aid options, said bill sponsor Rep. Mari Leavitt, D-University Place. “It’s really hard if … READ MORE

On this Memorial Day, we remember the generations of heroes who gave their lives out of service to this country. As a military mom and daughter, I am grateful for the sacrifice and inspired by the service of our all our veterans and military families. Thank you. #MemorialDay2020 #neverforget ... See MoreSee Less

Share on FacebookShare on TwitterShare on Linked InShare by Email

Today we take a moment to honor fallen service members and their families for their ultimate sacrifice and service to our country.
#neverforget #MemorialDay2020 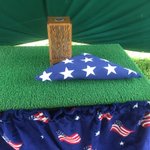